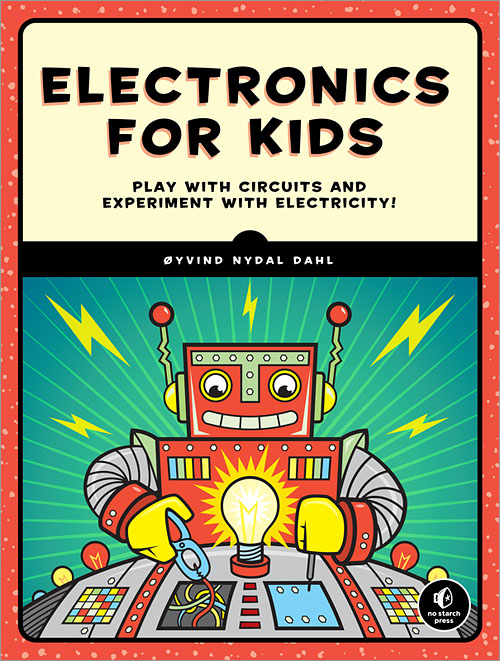 Play with Simple Circuits and Experiment with Electricity!
Artikel-Beschreibung

Why do the lights in a house turn on when you flip a switch? How does a remote-controlled car move? And what makes lights on TVs and microwaves blink? The technology around you may seem like magic, but most of it wouldn't run without electricity.

Electronics for Kids demystifies electricity with a collection of awesome hands-on projects.

In Part 1, you'll learn how current, voltage, and circuits work by making a battery out of a lemon, turning a metal bolt into an electromagnet, and transforming a paper cup and some magnets into a spinning motor.

In Part 2, you'll make even more cool stuff as you:
- Solder a blinking LED circuit with resistors, capacitors, and relays
- Turn a circuit into a touch sensor using your finger as a resistor
- Build an alarm clock triggered by the sunrise
- Create a musical instrument that makes sci-fi sounds

Then, in Part 3, you'll learn about digital electronics--things like logic gates and memory circuits--as you make a secret code checker and an electronic coin flipper. Finally, you'll use everything you've learned to make the LED Reaction Game--test your reaction time as you try to catch a blinking light!

With its clear explanations and assortment of hands-on projects, Electronics for Kids will have you building your own circuits in no time.

Oyvind Nydal Dahl built his first circuit at 14 and has been passionate about electronics ever since. He has a master's degree in electronics from the University of Oslo, helps companies develop new products, and travels the world while teaching electronics workshops.